Using exceptions for flow control is slow, even for DateTimeFormatter

Last week, I reviewed a seemingly simple patch to an Apache Crunch pipeline. Functional details don't matter, but the pipeline processes loads of hits from HTTP proxies. Hits have a timestamp and the patch aims to enrich every hit with some metadata indexed by user and business date (ie. we query a repository with a composite key, part of it is the date formatted as a yyyyMMdd string).

Functional requirements are clear, the code is simple and the repository is more than fast enough to not affect the performance profile of the pipeline

However, while QA'ing the patch I noticed an unexpected slowdown. Since our end-to-end tests are configured to always profile a few map & reduce tasks with HPROF, it was easy to generate a CPU Flame Graph which showed that the following line accounts for ~25% of the on CPU time:

According to its Javadoc BASIC_ISO_DATE is exactly what we should use to format a LocalDate as a yyyyMMdd string:

The ISO date formatter that formats or parses a date without an offset, such as '20111203'.

This returns an immutable formatter capable of formatting and parsing the ISO-8601 basic local date format. The format consists of:

HPROF is far from perfect and has many flaws, see Evaluating the Accuracy of Java Profilers or Profilers are lying Hobbits from Nitsan Wakart. However, HPROF support is built-in in Hadoop map reduce and it would be stupid to not use it if you haven't invested in better tooling yet. When using HPROF I don't expect to get an accurate view of the system. Here, it is very likely that the weight of the format call is overestimated due to sampling bias(es). However, it tells me that something is likely wrong and requires investigation.

Before digging into code & benchmarks let's start with a quick back-of-the-envelope calculation. HPROF is configured to take a sample every 9ms and reports 3912 samples in LocalDate.format. That's ~35 seconds. This mapper processes ~500k records. It means that each call to format cost ~70μs. We also know that the same job from the master branch takes ~90 seconds to process ~500k records, that's ~180μs per record. We will use these ballpark figures to check our benchmarks later.

Now let's observe the relevant part of the Flame Graph:

According to the Flame Graph, a significant amount of time is spent filling in stack traces. I did not expect this code path to throw exceptions but digging into JSR 310 source code learned me that DateTimeFormatter.BASIC_ISO_DATE is defined as follows:

While we use this formatter to format a LocalDate which has no ZoneOffset information, it would also print the ZoneOffset if available (ie. formatting a ZonedDateTime). Digging further into the code shown me that this optional segment is responsible for an exception being thrown on each invocation:

Basically, DateTimeFormatter uses exceptions for flow control! This is bad because exceptions are slow when... nonexceptional. In our case, the exceptional branch is always taken. It is even worse because exception performance depends on stack depth and Apache Crunch often involve deep stack traces. Because DoFns are chained using method calls, each DoFn adds three frames to the stack. It is not uncommon to see 128+ frames deep stacks.

With the help of a JMH benchmark, we will now try to discover the real cost of using BASIC_ISO_DATE to format a LocalDate:

Following graph compare the median cost per operation of baseline to basicIsoDate at various stackDepth and batchSize = 1: 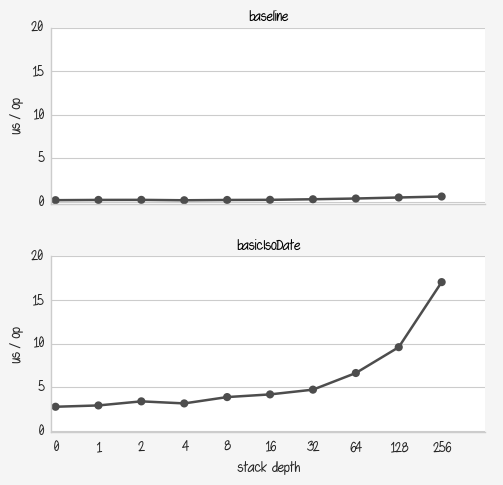 The previous graph showed the median cost per operation. As a safety check, following graph shows the same at p50.0, p90.0, and p99.0: 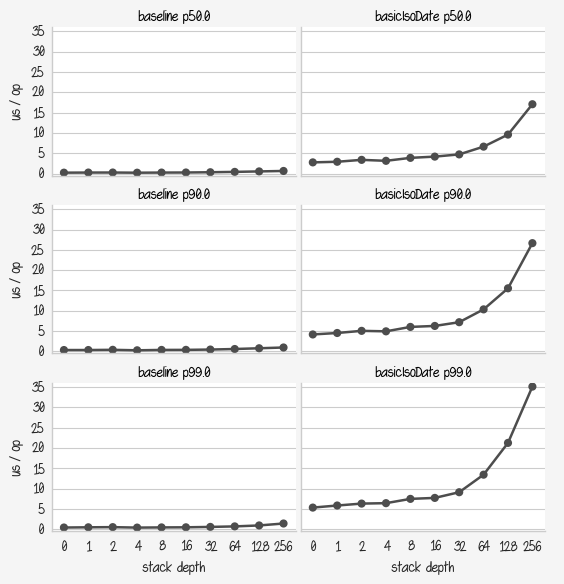 Nothing fancy here. We can now affirm that, on average, BASIC_ISO_DATE costs more than 10μs to format a LocalDate as soon as the stack is deeper than ~128 frames. However, it is not yet possible to say that exception being used for flow control is the cause of the slow down. Using a good profiler like perfasm, we could analyze where time is spent. Or we could write benchmarks to discover the real cost of exception creation and handling. This is tough work. Luckily, Aleksey Shipilёv already did that in The Exceptional Performance of Lil' Exception. As usual, Aleksey did a great job to explain what is going on under the hood and how to craft valid benchmarks. If you haven't read it yet, GO READ IT NOW ! And then read it again.

In his article, Aleksey states that instantiating an exception takes on average ~4μs when the stack is 32 frames deep, ~6μs at 64, ~11μs at 128 and ~21μs at 256. His numbers are quite close to what we observed for basicIsoDate.

While 10μs may seem a short amount of time for a human, computers are insanely fast. We should be able to format way more than 100k LocalDate per second. Even when the stack is more than 128 frames deep. Since the exception occurs in the optional part of BASIC_ISO_DATE, we can hope that if we define our own format without the optional part no exception will be thrown (and get our 10μs back): 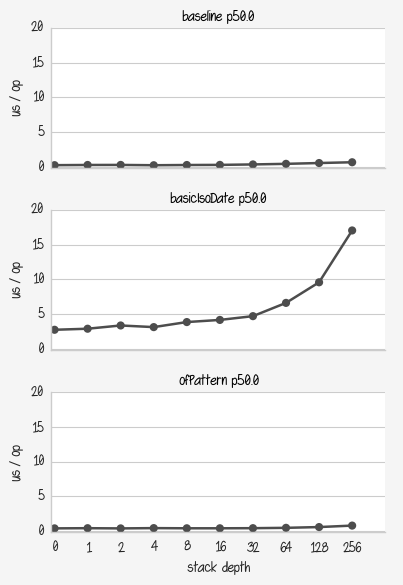 ofPattern is much faster than basicIsoDate and is seems quite close to the baseline. We are now at least an order of magnitude faster.

Let's zoom in and compare the cost of ofPattern VS baseline. Since costs look quite close and that call might be more expensive than format, we will also display the graphs at different batch sizes: 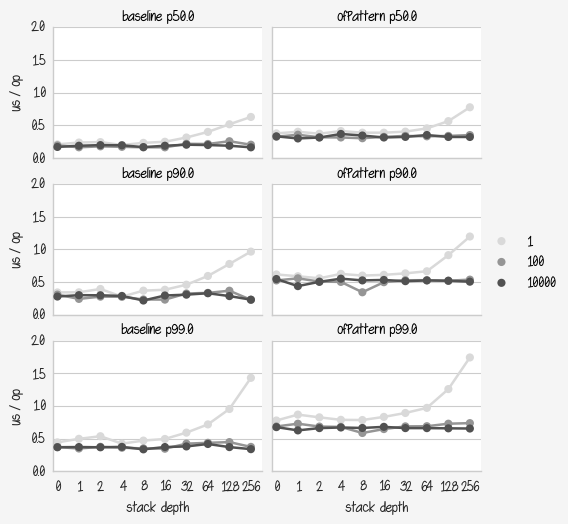 The cost of formatting a LocalDate with a custom pattern at any stack depth is a few tens of nanoseconds, few hundreds at worst. That's one to three orders of magnitude faster than BASIC_ISO_DATE.

I could refine my graphs or provide the raw JMH output to get more accurate numbers but don't really need to. With these few simple steps I learned that: